The Samsung Galaxy Fold has a 5G variant that was just certified by the FCC. This is according to a leaked filing obtained by My Smart Price. The device was filed back on April 25 and the certification from an EMC report was approved on June 3.

The EMC (Electromagnetic compatibility) test ensures the device doesn’t emit too much electromagnetic energy to cause or receive interference to/from other devices. 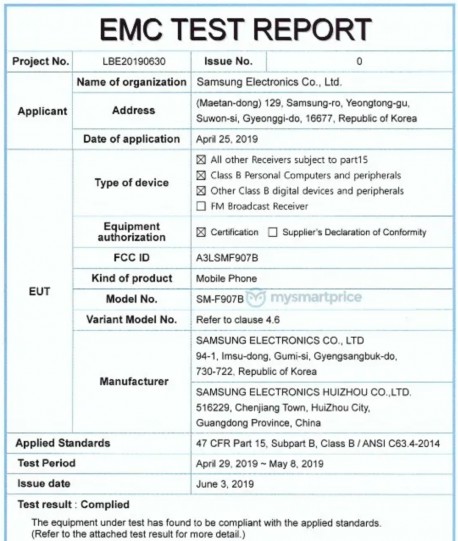 The 4G variant of the Galaxy Fold supports dualSIM via a physical nanoSIM and an eSIM while the 5G variant uses a single SIM slot. Meanwhile, the 5G model will sport a smaller 4,235 mAh battery versus the 4G variant’s 4,380 mAh. Aside from battery capacity and connectivity differences, both variants are identical.

Samsung’s Galaxy Fold was voluntarily delayed back in April when initial review units were unexpectedly failing. The folding display was much too fragile and the delay was to ensure a more durable design before arriving into the hands of the public.

The delay is soon coming to an end as Samsung Display Vice President announced last week. Although the issues appear to “have been ironed out, and the Galaxy Fold is ready to hit the market,” there is still no specific date or timeframe for release.